Have you read any military romantic suspense novels lately? If not, pick up Singed by Kaylea Cross, find a nice quiet spot and indulge yourself! You will not be disappointed as Kaylea takes you on a heartfelt emotional journey riddled with danger! 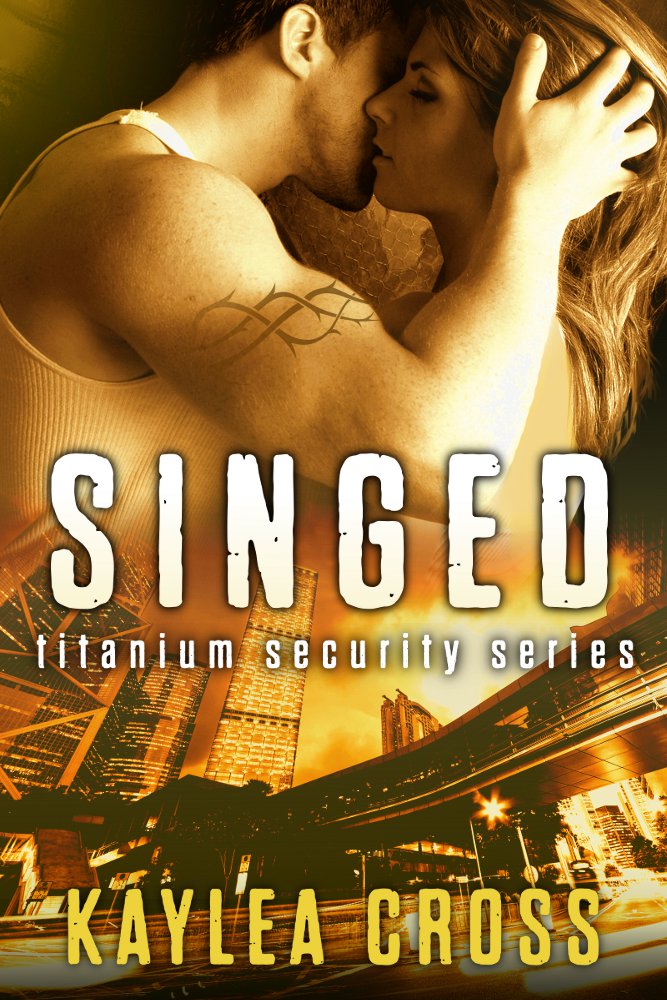 Gage.  Over six feet of ripped tattooed badass with a soft spot for one woman. Claire. Sure, he is an ex-Master Sergeant that can handle himself and anyone that gets in his way, but it is the man beneath the brick-house that we get to know in the second installment of the Titanium Security Series by Kaylea Cross.

We get a teasing glimpse of Gage and Claire in the first book of the series, Ignited.  Moving into this book we get to see the original storyline pick up and evolve on American soil this time through the eyes and emotions of two people who clearly have feelings for one another but were separated by fear.  Claire was raised by a father and has a brother who both served in Special Forces. She vows not to get involved with another military man as she has lived first-hand what devastation can be inflicted on a family when a soldier returns from duty wounded emotionally.  While her brother battles PTSD Claire becomes involved in investigating part of the sinister plot that was set in motion overseas in Pakistan and has her worried for her life.

Enter Gage. He is part of the team investigating the plot to take out a “target” and also assigned to protect Claire in case that target is her. His masculine features make us swoon. His heart and soul make us cheer.  Kaylea once again brings her characters to life in a way that makes us wish they were real.  Their pain and heartache become ours and you may find yourself cheering them on as they dance around each other in this lovely tension filled story. While Singed is full of action placed at a satisfying pace throughout the novel, ultimately the story that is told is that of two people trying to find each other again.  Claire is doing her best to ignore her need for Gage and insists on tamping down the emotion that floods her when he is near.  Gage manages to keep the alpha in him alive and well while barely hiding his broken heart from Claire as they end up working together again. Their past continues to haunt their present and potentially their future as they learn to trust each other and lean on each other for support.

This is a story best suited for those who enjoy danger and intrigue laced with emotional angst, bad boys with big hearts and the occasional very well written intimate scene. In fact, the intimate scenes that Kaylea writes should actually win awards in my opinion.  Classy and filled with emotion, she takes you on an incredible journey with the characters.  When you hear of readers talking about their “book boyfriends” just know that Gage will definitely be on many short lists. His charisma and heart will win you over. Look out boyfriends and husbands alike. The bar may have just been set up a notch or two!

She walked away from him once…

Struggling to live with her decision to walk away from the only man she ever loved and watching helplessly while her brother succumbs to his battle with severe PTSD, NSA analyst Claire Tierney’s life is at an all time low. The final hit comes when she accesses classified information at work that might get her fired. Instead, she’s assigned to a joint taskforce charged with hunting down a Taliban assassin planning an attack on American soil, and finally has something productive to focus on. Until she meets the rest of the team and learns she’ll be working with the last person on earth she wants further contact with; her ex. She knows letting him go was the biggest mistake of her life, but just when she thinks things can’t get any worse, new intel points to the assassin’s intended target. Her.

This time he’s not letting her go…

As a former Special Forces Master Sergeant and second-in-command of his Titanium Security team, Gage Wallace can handle anything, except being forced to go through life without Claire. When she abruptly walked out on him six months ago, his whole world caved in. It’s clear she’s still determined to keep her distance, but when she’s named a possible target of the very cell they’re trying to dismantle, Gage will stop at nothing to ensure she’s safe. When tragedy destroys Claire’s defenses and the explosive desire between them ignites once more, this time he’s not letting her go. Too late they discover that the danger confronting them is far greater than anyone ever realized, and it’s a race against time to stop a terrorist from unleashing hell on them all.

One thought on “Review: SINGED by Kaylea Cross”