Update – Congratulations to “Edie” the winner of Return to Oakpine! Thank you to all who participated!

Today we are celebrating Ron Carlson’s latest novel, Return to Oakpine with a look at the book and a giveaway! 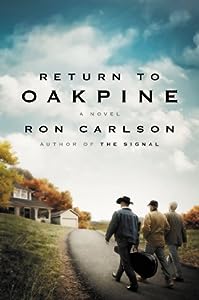 In this finely wrought portrait of western American life, award-winning author Ron Carlson takes us to the town of Oakpine, Wyoming, and into the lives of four men trying to make peace with who they are in the world. Return to Oakpine is a generous, tender look at friendship and family that warmly evokes small-town life with a wonderful cast of memorable characters.

Aside from a new mountain bike store and a hip new coffee shop, not much seems to have changed for decades in Oakpine, Wyoming, as Carlson’s novel opens in 1999. But roiling in the depths of this sleepy town are the hopes and dreams of its residents, realized and deferred, marriages happy and struggling, friendships lost and regained—and all of this will come whirling to the surface with the return of Jimmy Brand. Thirty years earlier, Jimmy had split town for New York City the second he could after graduation—and the tragic death of his beloved older brother—and hasn’t looked back since. He’s made his way well in the world, becoming a successful novelist, but his homecoming is not a triumphant one. Jimmy Brand is dying.

Long before becoming a writer, however, Jimmy was in a band. In this evocative novel, Carlson tells the story of Jimmy and his three former band mates, Frank, Mason, and Craig, and what has become of them since the heady days of high school, when they would play their songs alongside bonfires on summer nights, when girls and beer and American rock and roll would let them forget, just for a few sweet hours, about college, and lost football scholarships, and growing up.

Grow up they would, however, and with Carlson’s characteristic grace and psychological acuity, we learn the different directions in which life has taken these men. After marrying his high school sweetheart—a marriage which is in trouble—Craig Ralston has remained in town his whole life, running a hardware store. Frank Gunderson owns a bar, but harbors regret that he never escaped. Mason Kirby made it out of Oakpine, becoming a successful lawyer in Denver, but he hasn’t stopped to breathe in thirty years; he’s just returned to fix up and sell his parent’s old house. One thing is true for all four of these complicated, finely drawn men: now that they are all back in town, getting the band back together—even if it’s just for one more time—may be the most important thing they ever do.

RON CARLSON is the author of five story collections and four novels, most recentlyThe Signal. His fiction has appeared in Harper’s, The New Yorker, Playboy, GQ, Best American Short Stories, and The O. Henry Prize Stories. He is the director of the writing program at the University of California at Irvine and lives in Huntington Beach, CA.

5 thoughts on “Spotlight & Giveaway: RETURN TO OAKPINE by Ron Carlson”