The Wicked First anthology is out and available for just 99 cents during release week. I have read two of the books from this bundle so far and cannot wait to read the rest!

As part of the tour you will get to read excerpts from different books. Today I am sharing one from First Temptation by Joan Swan (one of the books I have read and reviewed just last week). The authors are also giving away two $100 Amazon gift cards at the end of the tour, so be sure to check out the details below on how to enter before you leave!

“What are you grinning about now?” Zoe came down the back hall and around the counter, hands on hips, smooth brow pulled in a frown, full lower lip—the one that felt so damn good pulled between his—pushed out.

“I was just thinking”—he set the drill on the counter and looked directly into her eyes—“about how you use your mouth like a fucking goddess.” He paused, relishing the way her expression glazed over when she absorbed his meaning. “And hoping I get to experience it all over my body…soon.”

Luscious heat drifted through her eyes. Her lips parted.

Then she lowered her eyes to the counter, ran her tongue over her lower lip, and drew a slow, deep breath until the tendons of her sleek neck stood out. “Not likely.”

She blew the air out, crossed her arms, and leaned one hip against the main display case. “Why don’t you go play with the toys? I’ll put the camera in.”

Taft pulled a utility knife from the toolbox he’d brought. “Sweetness, you may be the boss at the border, but not here.”

“Better with tools than toys, are you…” He glanced at her from beneath his brows with a grin. “Mary?”

“You know enough for both of us, Satan.”

He barked a laugh. Found it surprising she didn’t try to deny. “Are you the missionary, vanilla type of girl?”

“You think all sex has to be vanilla unless it includes a foreign object? I’ll have you know, I have smokin’ hot sex just fine without the need for sexual aids.”

“Sexual aids?” Taft stopped loosening the screw holding the housing together and lifted his brows at her.

She returned the brow lift in challenge. “Mara’s words. She is the expert.”

“I thought she said I was the expert.”

“I think you have very big ears.”

“That’s her way of justifying what she sells.” Taft replaced the blade in the knife with a sharp one, trying not to frown at the slice to his ego. “They’re toys. All this shit makes sex more fun, Brooks. These are all enhancements to the ordinary act that can only be done so many ways. They make sex better, more fun, more…erotic. They add variety.”

Her eyes narrowed as if she were inspecting his psyche. He turned toward the wall joining Incognito and Fumar and took a solid grip on the blade.

“Does your man agree with this vanilla philosophy? I bet if you asked, he’d secretly be hoping for—”

Brooks’s hand covered his, stopping his first cut into the drywall. He was suddenly, intensely aware of her proximity. Of her soft body heat. Of her scent. Orange…almond…

He turned his head, closed his eyes, and moved his nose and mouth down the length of her forearm, inhaling and letting his lips brush her skin.

He groaned and pressed his closed mouth to her wrist, mumbling, “Vanilla.”

She laughed and leaned forward. “What?”

He lifted his mouth from her skin to say, “You’re wearing something with vanilla in it.”

His entire body responded with hunger.

Before he thought, he opened his mouth and bit her wrist—gently. She gasped, and her other hand moved to his head.

Her fingers slid into his hair and curled around a few pieces. “I thought you said vanilla was boring.”

He moved up her arm and repeated the bite-release-lick pattern, and she leaned into him on a sigh. He smiled. “You like touching me, don’t you?”

Taft had been carrying around an almost erection since laughing with her in the café that morning. Everything he’d seen and learned about her since then only intensified his interest.

Check out the books that are part of this anthology: 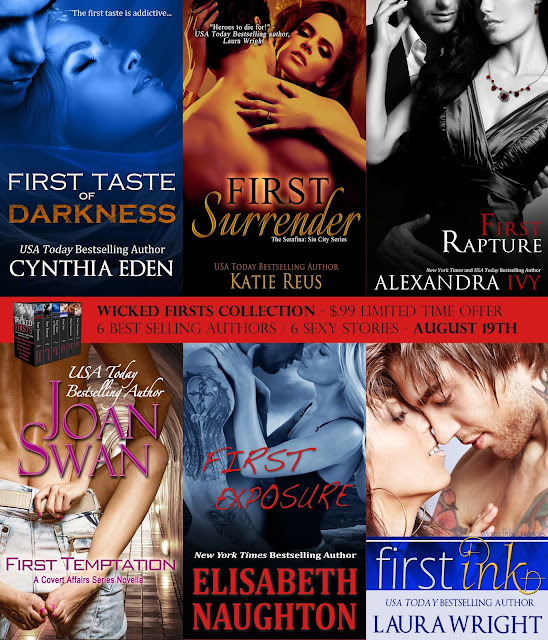 A film that could make her career. A weekend that will change her life…

When actress Avery Scott’s assistant goes missing researching a role for Avery at an exclusive adults-only resort, Avery finds herself with only one choice: travel to the resort herself and look for clues. She hires an elite operative from Aegis Security to accompany her. She just doesn’t expect to get former undercover FBI agent Cade Blackwell—the man who ripped out her teenage heart twelve years before. One weekend at the sexiest resort in the world with the only man she’s ever loved will expose her to more than just a kinky new lifestyle. It’ll expose her to numerous wicked firsts that will test every ounce of her self-control. And if she’s not careful, she could lose her heart—and her life—in the process.

Visit Elisabeth’s website to find more of her incredible books.

Madison Philips has only one reason to return to Las Vegas: Luc Angeli. The tall, dark bad boy took her virginity on her eighteenth birthday and then walked away, now she’s back, and ready for revenge. Luc Angeli spent his youth trying to earn the approval of his philandering father. Now he’s his own man, but there’s still something missing from his life. He doesn’t know what it is until he catches sight of Madison across a balcony. Suddenly he knows this woman is what he’s been searching for, and this time he’s not walking away.

Visit Alexandra’s website to find more of her incredible books.

Hot sex. No regrets. Jess Delaney has spent her life playing the role of the good-girl. On a trip to Vegas, she decides to walk on the wild side when she meets mysterious Blake Landon. Rich, powerful, and carrying plenty of secrets, Blake is unlike any man she has ever met before. But as the passion burns between them, danger waits in the darkness…a danger that may just claim Jess’s life…

Visit Cynthia’s website to find more of her incredible books.

Rush
Women in his bed, celebs and rockers in his chair, life is pretty freaking swell. Then she walks back into it again. Not for pleasure, but for pain. For Ink. A bleeding heart to match the one she left him with five years ago.

Addison
She can’t forget him or the pain she caused him. All she has is a hope for redemption. But it’ll only work if he lets her inside his exclusive world, under his famous artist’s needle and into his bed—once again.

Visit Laura’s website to find more of her incredible books’

He’s dangerous, sexy, and everything she wants. And he’s about to make his claim…

Hayden, the dangerously sexy, tattooed ex-SEAL is one of the best friends Sierra has ever had—and the main star in her wildest fantasies. But he doesn’t see her that way. And she’d die of embarrassment if he found out she was still a virgin.

Hayden’s struggled to keep his attraction to the beautiful, dark haired casino chef a secret. But when an attacker targets Sierra, Hayden’s protective instincts go into overdrive. With the attraction between them burning out of control, he’ll do whatever it takes to protect her and make her his.

Visit Katie’s website to find more of her incredible books

Counterterrorist agent Taft Walker is up for the challenge of posing as an adult store owner with a new female undercover partner who is also a sex-toy virgin. At least until he sees the real woman beneath her tough façade.

Border Patrol Agent Zoe Brooks is ready to get off the front lines. She’s willing to tolerate a swaggering partner like Taft for a new opportunity. But she’s not prepared for the way he understands her deepest, sexiest desires.

Visit Joan’s website to find more of her incredible books

Thanks for celebrating this release with us! Follow the tour for more excerpts!

8/23- Reading Between the Wines

8/31- Ramblings From This Chick