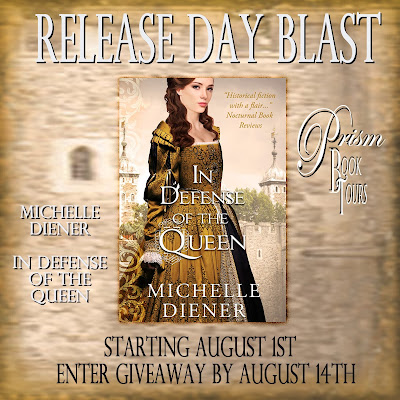 Adventure, intrigues and assassins, a wild ride against time. Historical fiction with a flair is what Diener does best! – Nocturnal Book Reviews

In Defense of the Queen by Michelle Diener An artist never betrays her patron . . . especially one of the world’s most powerful kings.

Susanna Horenbout has learned this lesson from the cradle. But when she receives a letter from her father telling her to do just that, she faces a dilemma. Betray Henry VIII, or carry out the request of her father’s employer, Margaret of Austria, and pass secret information to Henry’s queen, Katherine of Aragon.

Caught between the machinations of her husband and her nephew, the Emperor Charles, Queen Katherine needs all the allies she can get. But what can Susanna really do to help her, and even if she does, will it be enough?

Susanna and her betrothed, Parker——one of Henry’s most trusted courtiers——balance on the knife’s edge of treason as they try to make sense of both international and domestic conspiracies. Sometimes, it’s better the enemy you know . . .

Praise for the previous books:

“With its richly detailed historical setting and intrigue-filled plot, “In a Treacherous Court” is simply irresistible.” – Chicago Tribune

“Just when readers think there is nothing new to be learned about Henry VIII, debut author Diener delivers a taut suspense . . . that will keep you turning the pages.” – Kathe Robin (4 star review in RT Magazine August 2011 issue)

“Diener’s writing style is beautiful, to the point, vivid and exciting. This author is one to watch if you love the likes of Philippa Gregory or Anne Easter Smith. The characters are going to hook you first, and the intrigue will keep you turning the pages.” – Reader’s Entertainment

Michelle also contributed a short paranormal story to the ENTANGLED Anthology entitled BREAKING OUT. All the proceeds of the sale of ENTANGLED go to the Breast Cancer Research Foundation. Michelle grew up in South Africa, and now lives in Australia with her husband and two children. Thank you for celebrating the release of In Defense of the Queen with us!

One thought on “Release Day Blast & Giveaway: IN DEFENSE OF THE QUEEN by Michelle Diener”